Two representatives from Manchester-based M&I Materials Ltd had the privilege of visiting Buckingham Palace after the firm was awarded the equivalent of a company knighthood in this year’s Queen’s Awards for Enterprise. 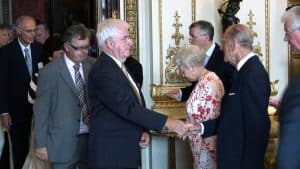 Colin Salt, Chairman of M&I Materials and Steve Jeffery, Export Sales Manager, attended a special evening reception for 2009 Queen’s Award winners, hosted by Her Majesty The Queen and other members of the Royal Family.

M&I Materials won its Queen’s Award in the International Trade category in April this year. The firm specialises in manufacturing materials for industry and science and was commended for achieving substantial and continuous growth in overseas earnings and commercial success. The company increased export sales by 228% between 2002 and 2008, which accounted for 72% of total sales.

Products at the centre of M&I’s exporting success include Midel® and Wolfmet®. Midel is an environmentally friendly dielectric fluid used to improve fire safety and the performance of transformers in buildings, trains and wind turbines. Wolfmet tungsten alloy is a high density metal used in aerospace, in the treatment of cancer to shield against radiation, and in Formula 1, to help cars achieve a lower centre of gravity.

Thriving brands Apiezon® and Metrosil® have also been instrumental in M&I’s achievement. Apiezon high vacuum lubricants are used by organisations such as NASA and British Aerospace. Metrosil high voltage surge protection devices have been specified for some of the most prestigious power plant projects.

Steve Jeffery commented: “The Queen’s Award is a fitting tribute to the hard work and effort of the team.  Both the Chairman and I were very proud to represent M&I Materials at Buckingham Palace in front of Her Majesty The Queen”.